On Wednesday, May 29, the trial of geologist Scott Daniel Warren began. If convicted, he faces up to 20 years in a federal penitentiary. What heinous crime did Warren commit to warrant such severe punishment? He exercised his religious freedom to provide water, food, and clothing to those facing danger as they trekked across the desert. Warren had the audacity to take the words of Jesus literally, “For I was hungry and you fed me, thirsty and you gave me to drink, an alien and you welcomed me, naked and you clothed me, sick and you ministered to me”

Warren encountered Kristen Perez-Villanueva and José Arnaldo Sacaria-Goday in the 860,000-acre Cabeza Prieta National Wildlife Refuge, where the two had lost their backpacks containing food and water while being chased by border agents. Traversing the desert without food or water can be deadly. According to the Pima county medical examiner, 2,615 human remains were recovered between 2001 and 2016. Warren discovered 18 of those bodies.

What makes this land “sacred,” as Warren calls it, is the death of migrants upon it. According to Ryan Devereaux’s exhaustive account published by the Intercept earlier this month, Warren testified that “The entire desert is a sacred place. It’s a graveyard.” For Warren, leaving water becomes a religious act of remembrance and solidarity, of being presente. Not wanting Perez-Villanueva or Sacaria-Goday to join the list of what the Border Patrol considers “collateral damage,” he brought them to “the Barn,” a small building in Ajo, Arizona, used by No More Deaths, to provide them with food, water, beds, and clean clothes. This is where he was arrested on April 17, 2018, and charged with two felony counts.

I too am guilty of the same “crime” Warren committed, for I, along with thousands of other volunteers over the past decades, have walked the migrant trails bringing food, water, clothes, and medical supplies. Like Warren, I was once detained for harboring two migrants among us, though I was neither arrested nor charged. Many of us who commit the same “crime” as Warren do so as an act of fidelity to the Gospel of Matthew 25. By the praxis committed by Warren, myself, and thousands of volunteers, we define our humanity and our faith with every jug of water, can of beans, article of clothing, or box of bandages we leave on these trails of terror where thousands have horribly died, most from dehydration.

Because it takes days to cross the mountains before getting to the desert, many are forced to drink from pools of stagnant water, which may contain debris or floating animal corpses. Out of desperation, some are forced to drink their own urine. A foot blister can become a death sentence. Those who can’t keep up with their group are left behind with no way to find their destination. If the elements don’t kill you, other humans might. Women often begin taking birth-control pills months before starting their northern journey due to the possibility of being raped by the smuggler, the drug runner, rogue Border Patrol agents, and/or the unscrupulous employer if she makes it to a U.S. city. Migrants are easy targets on both sides of the border.

One reason I don’t face a possible 20-year sentence while Warren finds himself in this predicament is because two things have changed since the 2016 election. The first is the Trump administration’s zero tolerance for anything deemed to assist the undocumented. Zero tolerance was institutionalized in an April 11, 2017, memo from then-Attorney General Jeff Sessions, who called for the “disruption of organizations” like No More Deaths. There appears to be an attempt to extend this administration’s immigration crackdown to those providing humanitarian aid.

The second reason is this administration’s emboldening of the Border Patrol, which retaliated for a report No More Deaths had released hours before Warren’s arrest. The report charges Border Patrol agents with “regular and widespread destruction of water supplies with little or no consequences.” As brown bodies perish of dehydration, the Border Patrol, which has a moral obligation to prevent the arbitrary deaths of the undocumented, instead willfully contributes to their excruciating demise by dumping water left on the trails by humanitarian organizations or vandalizing the water jugs. Water is life! Of the 31,500 gallons of water No More Deaths left at about 140 station on the trails between 2012 to 2015, we know about 86 percent were used, and we recovered about 3,500 destroyed gallons. I myself have seen some of these empty jugs slashed by Border Patrol agents’ knives.

At this moment a Good Samaritan stands trial and may receive up to 20 years for fulfilling the basic call of his faith. Alas, our Latinxphobic laws—based on characterizing us as having lots of problems, bringing drugs, and being rapists—are suppressing the religious freedom of those like Warren who are, in their view, keeping Jesus’ teachings and saving lives.

We are a nation that has made humanitarian aid a crime, and has made fidelity to the Bible a felony. The abuses faced by the undocumented, and the religious persecution of Warren have led to worldwide condemnation. In a May 25 letterwritten by United Nations officials, “Serious concern [was] expressed over the arrest and charges against Mr. Scott Warren” for it demonstrates a threat to basic civil liberties. A communique released by Amnesty International demanded that “the U.S. Department of Justice . . . immediately drop all criminal charges against humanitarian volunteer Dr. Scott Warren, and stop criminalizing humanitarian aid.”

As brown bodies continue to perish on our southern borders at a rate of five every four days, too many churches reach for the snooze button. Churches may be quick to raise their hands to praise God, but many remain slow to raise a finger to help “the least of these.” On June 5, laity together with clergy wearing their sacred vestments will gather at The federal courthouse in Tucson for an interfaith prayer vigil. Immediately afterward, they will make their way into the courthouse to bear witness to the erosion of religious freedom. Take a good look at who does—and who does not—show up for religious freedom on this occasion. It will have a great deal to say about “religious freedom’s” loudest defenders. 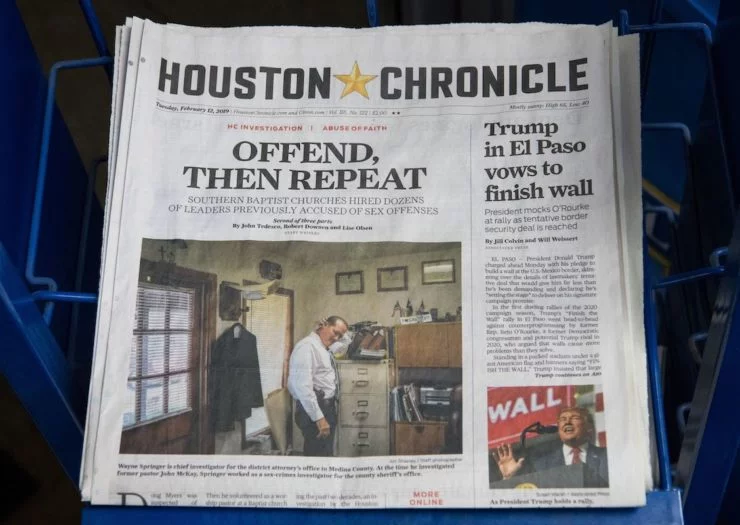 Bless their hearts. Earlier this week, some 8,000 delegates representing the denomination that ordained me some 25 years ago gathered in Birmingham, Alabama, to hold their annual conference. Faced with a history of racism, patriarchy, and sexual abuse, they came together to put into words…