Handbook on U.S. Theologies of Liberation

The purpose of this handbook is to introduce the reader to Christian concepts from the perspective of U.S. marginalized communities. It explores the interrelationship between religion, community, and culture in the social context of different marginalized groups, specifically those rooted in the African American, Amerindian, Asian American, feminist, gay/lesbian, and Hispanic experiences, and their impact on the development of U.S. theologies of liberation. The handbook gives attention to the history, nature, sources, and development of these theologies and the theologians who contributed to their formation. Of particular interest is how Handbook of U.S. Theologies of Liberation clearly distinguishes both the differences and similarities between these U.S. theologies and their Latin American counterparts.

The handbook is divided into two sections: Thematic Essays that provide a general overview of a specific theological theme from the perspectives of different marginalized groups; and Contextual Essays that focus on the specific contributions of scholars from various racial, ethnic, and gender backgrounds.

“This volume represents a splendid introduction to the various dimensions and strands of liberation theology in the United States. Its mixture of contextual essays, covering the major groupings in question, and thematic essays, encompassing the major areas of theological studies, is most felicitous and helpful. In every respect, therefore, this is a singular contribution to theology writ large.”

“A deep-seated prejudice pervasively consigns liberation theologies to the margins of both the globe and the academe – even more so in these times of thought-policing, confusingly identified as ‘globalization.’ De La Torre’s handbook is a welcome antidote to that prejudice.  It highlights the lively and subversive presence of indigenous liberation theologies at the heart of empire. And it does so by giving voice to spokespersons from those very ‘minorities’ that, together, become now the U.S. majority faster and sooner than the thought-police would like. This handbook is a timely blessing for the poor and oppressed in this country.” 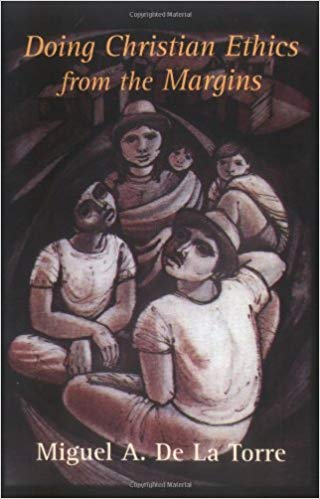 Doing Christian Ethics from the Margins