La Lucha for Cuba: Religion and Politics on the Streets of Miami

For many in Miami’s Cuban exile community, hating Fidel Castro is as natural as loving one’s children. This hatred, Miguel De La Torre suggests, has in fact taken on religious significance. In La Lucha for Cuba, De La Torre shows how Exilic Cubans, a once marginalized group, have risen to power and privilege—distinguishing themselves from other Hispanic communities in the United States—and how religion has figured in their ascension. Through the lens of religion and culture, his work also unmasks and explores intra-Hispanic structures of oppression operating among Cubans in Miami.

Miami Cubans use a religious expression, la lucha, or “the struggle,” to justify the power and privilege they have achieved. Within the context of la lucha, De La Torre explores the religious dichotomy created between the “children of light” (Exilic Cubans) and the “children of darkness” (Resident Cubans). Examining the recent saga of the Elián González custody battle, he shows how the cultural construction of la lucha has become a distinctly Miami-style spirituality that makes el exilio (exile) the basis for religious reflection, understanding, and practice—and that conflates political mobilization with spiritual meaning in an ongoing confrontation with evil.

—British Bulletin Of Publications Of Latin America, The Caribbean, Portugal, And Spain

“This, the first major study of popular religion in Miami’s community of exiled Cubans, is outstanding. De La Torre captures the intimacy and flavor of a spiritual movement that crosses moral and theological lines. It’s bound to upset some for its frank conclusions; but all great books go against the inherited grain in some way.”

“A daring and careful exposé of the political and religious right-wing discourse circulating among Cuban exiles. In this extremely important, courageous, and long-overdue project about cubanidad (Cubanness), De La Torre has created a historical marker in the effort to clear the way for a more democratic and spiritually compassionate world for Cuban Americans.” 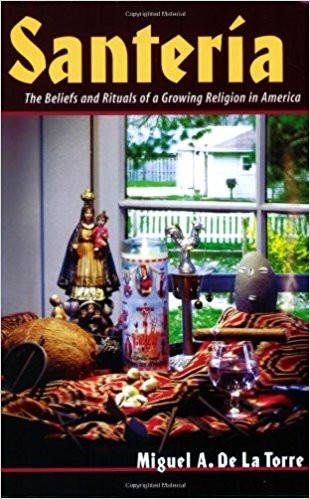 Santería: The Beliefs and Rituals of a Growing Religion in America