Santería: The Beliefs and Rituals of a Growing Religion in America

This book by Miguel De La Torre offers a fascinating guide to the history, beliefs, rituals, and culture of Santería — a religious tradition that, despite persecution, suppression, and its own secretive nature, has close to a million adherents in the United States alone.

Santería is a religion with Afro-Cuban roots, rising out of the cultural clash between the Yoruba people of West Africa and the Spanish Catholics who brought them to the Americas as slaves. As a faith of the marginalized and persecuted, it gave oppressed men and women strength and the will to survive. With the exile of thousands of Cubans in the wake of Castro’s revolution in 1959, Santería came to the United States, where it is gradually coming to be recognized as a legitimate faith tradition.

Apart from vague suspicions that Santería’s rituals include animal sacrifice and notions that it is a “syncretistic” form of Catholicism, most people in America’s cultural and religious mainstream know very little about this rich faith tradition — in fact, many have never heard of it at all. De La Torre, who was reared in Santería, sets out in this book to provide a basic understanding of its inner workings. He clearly explains the particular worldview, myths, rituals, and practices of Santería, and he discusses what role the religion typically plays in the life of its practitioners as well as the cultural influence it continues to exert in Latin American communities today.

In offering a balanced, informed survey of Santería from his unique “insider-outsider” perspective, De La Torre also provides insight into how Christianity and Santería can enter into dialogue — a dialogue that will challenge Christians to consider what this emerging faith tradition can teach them about their own. Enhanced with illustrations, tables, and a glossary, De La Torre’s Santería sheds light on a religion all too often shrouded in mystery and misunderstanding.

“The author, who grew up in the Santeria faith, provides insight into the myths, rituals, worldview, history and cultural influence of the Afro-Cuban religion. Neither condemning nor condoning, he seeks to provide the information and context necessary to prompt discussion and understanding between Santeria believers and Christians.”

“Writing as both an academic outsider and a privileged former insider, De La Torre retells Yoruba myths clearly and expressively, and his analysis of religious syncretism is both scholarly and accessible. Detailed descriptions of the various manifestations of each orisha make this one of the most comprehensive books on the subject, while the complex issue of Santeria ritual, which can include animal sacrifice, is handled unsensationally but vividly. This book should be part of any collection intended to represent the breadth of American religious experience.”

“Miguel De La Torre has performed the almost magical academic feat of balancing the objectivity of a trained observer with the insights of an insider. He leads his readers on a historical, theological, and cultural journey that goes to the heart of this rich religious tradition unfolding within a rapidly changing American society.”

“De La Torre succeeds fully in giving us the best general introduction to Santería, an Afro-Cuban folk religion brought to the United States by Cuban refugees after Castro’s 1959 revolution. . . He draws on both lived experience (having grown up in the religion) and scholarly expertise . . . to strike just the right balance between the personal perspectives of the faithful and the distance of a non-believing scholar. . . Strongly recommended.”

“A well-balanced presentation of a complex religious system that is continually growing and beginning to attract educated middle-class Euro-Americans.” 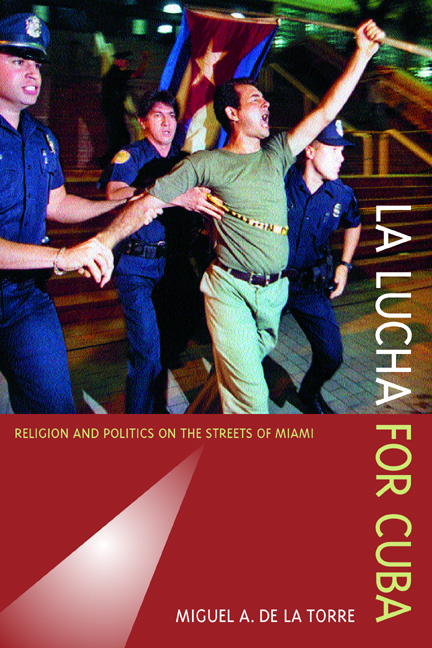 La Lucha for Cuba: Religion and Politics on the Streets of Miami