They sell the just for silver, and the poor for a pair of sandals.

Recently, I went cycling through Javanese villages not far from my home in Yogyakarta, Indonesia. I visited rural communities and spent the day at small cottage industries.

During my bicycling, I partook in making noodle pastries, tempe snacks, laying bricks and harvesting rice.

It is so easy to romanticize the poor and misread their smiling faces and pleasant demeanor for contentment and hope.

But for me, all of these activities caused me to think deeper about the connection between my global privilege and their economic disenfranchisement.

For I am convinced that we who live in the heart of empire, along with the few within the Global South that are able to enjoy a middle- and upper-class lifestyle, do so because the just are sold for silver and the poor for a pair of sandals.

At the time, I was wearing high-end, water-resistant hiking shoes – shoes that cost me about $200.

Those wheeling the sickle were barefoot; they had no sandals. I did the back-breaking work for a few minutes; these gentlemen who are over 60 spend the entire day scrunched over as they harvest the field.

I asked how much they expected to make that day. They responded by saying they would be paid 30,000 rupiahs at the end of the day.

This translates to about $3.19, which is barely above the lower range of Indonesianwages, which average from $2.93 to $5.35 a day. Of course, there is an underground economy that relies on trading goods and services, thus complicating the livability of the people.

Still, there seems to be something wrong with equating a day’s wage with the pocket change most Americans carry.

When I get to heaven, I’m going to put on my shoes.

If these rural workers have children wishing to go to college, they would be unable to pay tuition cost for a year at a low-end school, which would costless (about half less) than my hiking shoes.

Add books, housing and meals, and it becomes an impossibility. Their children are relegated to find similar types of employment on farms or in the city.

What would happen if this field hand were to get a job at one of the Nikefactorieshere in Indonesia?

Maybe then he could get a pair of comfortable shoes in which to work the fields. Right?

I’m afraid not. He or she could expect a salary of about 1.285 million rupiahs a month, which translates to about $4.80 a day.

What can $4.80 buy you in Indonesia? Barely enough to pay rent for a tiny, bare room, buy two meager meals a day, and bus fare to get to work.

One thing the worker would not be able to buy is the Nike sneakers he is producing. Why? Because they too are sold for a pair of sandals (or in this case, sneakers).

I’m going to shout all over God’s heaven.

Here is the connection, in case you missed it. I get to buy hiking shoes because the poor of the earth make them for me at slave wages. My riches are directly connected to their poverty.

But the ones who truly benefit are the CEOs and the stockholders in such companies (have you checked your retirement stock portfolio lately?) who directly are rewarded by keeping expenses (salaries of those who make the product, not the CEO’s leadership team) as low as possible.

And here is the internal contradiction of capitalism. As corporations search throughout the globe for the lowest possible wage to pay, the day will come (if it hasn’t already) when workers will not be able to purchase what they produce, causing an abundant surplus of goods whose weight could crush capitalism.

Could it be that the 2008 Great Recession begins the death pangs of this global economic system we created – death pangs that may whimper on just a few more generations?

The great irony of all this is that Congress has moved to protect the so-called “job creators” from taxation – when in reality their bonuses are calculated on how many jobs they can eliminate, outsource or maintain at the lowest possible wage.

In effect, they receive large bonuses when they sell the poor for a pair of sandals.

I met Tommy (not his real name) back in the 1980s at our local church where I served as deacon and Sunday school teacher. We became close friends and talked about many things. Both of us being young and single, not surprisingly one day our… 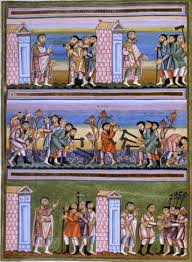 One early morning, a certain vineyard owner sets out to hire laborers. He goes to the local bodega where laborers usually wait to be hired, negotiates a fair day’s wage and sends them to his fields. Several hours later, mid-morning, he comes across some individuals by the…

Then, they will reply, “Lord, when did we see you hungry and fed you?” (Matthew 25:37) Seldom did I see an overweight person while living in Indonesia. In fact, at the food market I noticed a jamu (indigenous medicine) whose properties were supposed to help…