Most of those who self-identify as “pro-life” or believe in the “sanctity of life” are neither.  To truly be pro-life is to believe that all life, created by God, has worth, dignity, and purpose; therefore, no human, under any circumstance, has the right to play God and terminate any life.  To truly be pro-life is to consistently maintain this view in all issues.  Because all life has an opportunity to reconcile with their Creator, all life must be preserved at all cost.  For those who believe in Christian dogma, to terminate life early robs the person of coming into a saving knowledge of God and the hope of relying on God’s grace for everlasting life.  As it stands now, most conservatives and liberals are prolife on certain political issues and not on others.  Generally speaking, conservatives are usually prolife when it comes to abortion and euthanasia, while liberals usually advocate a prolife stance when it comes to war and capital punishment.  Conservatives prolife views are trumped by national security concerns, while the liberals’ prolife stance is trumped by personal freedoms.

To truly be prolife, to truly advocate for the sanctity of all life, an individual must stand against abortion, euthanasia, war, and capital punishment.  To support or participate in any of these four issues forfeits any claims to a prolife advocacy.  Hence most conservatives and liberals are not prolife, regardless to what they profess.  Each group allows something other than God – either the government or personal freedom – to takes precedence over and against the sanctity of life.

For my part, I am trying to be prolife, that is, I am trying to stand against abortion, euthanasia, war, and capital punishment.  I don’t say that I am prolife because I realize that I am speaking from a safe distance.  I recognize that I am simply trying, hoping to rely on God’s strength, yet recognizing that if I fall short, there is grace.  I stopped my prideful boast of truly being prolife when I was faced with a painful decision and discovered how easy it was for me not to live up to my religious convictions.

Nine years ago my mother entered her last week of earthly existence.  I flew to Miami to be by her bedside.  She, a nonsmoker, was dying of lung cancer.  By this time the cancer spread to other vital organs.  The doctor informed us that she would not live for long.  While she was still conscious, we had a wonderful opportunity to discuss eternity.  She knew she would soon die and made her peace with her God.  Soon after, the pain became so intense, so unbearable, that she was drugged with morphine to make her as comfortable as possible.  At this point she lost her dignity, her personhood, and her consciousness.  For about a week, she laid there in pain.  For a week I did not leave her side, waiting for a death that took its sweet time to arrive.  The woman I knew and loved left, but machines kept her body alive.  Even though I claim to be prolife, given the opportunity, I would have pulled the plug myself.  My action would have been motivated less by religious ideals and more by my deep love for the woman who gave me life.

Present laws forbid me from taking such actions.  But if Jesus said that if I think it in my heart, then I did it, then I am guilty of euthanasia.  I am guilty of not truly being prolife, regardless of my confession to the contrary.  Since her death, my greatest regret is that I stood by as she suffered that last week of life.  The drugs were not enough as she occasionally emerged from the fog of death.  Nothing good came from that last week.  I ask myself why she had to suffer.  I remain with very conflicted emotions and dogmatic beliefs that I confess have yet to be resolved.

If my prolife belief is correct, why when it touched my heart, was I willing – and if I am honest – am still willing to pull the plug.  Is my love for my mother so strong that I’m willing to go against my prolife stance, and be left with nothing except God’s grace and mercy?  But how can I be forgiven if I can’t repent from how I feel, from what I experienced.   Maybe I will not find resolution to my struggle until that final heavenly reunion when I find forgiveness from my mother for not loving her enough to proactively bring closure to a life racked in pain.

It is always easy to pontificate moral platitudes from the safety of houses of worship or ivy towers of learning. But the reality of the human dilemma is that most of us live in the messiness of life where right and wrong choices seldom present themselves. We live in the grayness that exists beyond the realm of absolutes.  Most of us are left with no choice, stuck between a bad and worse alternative.  But choose we must, conscious of the unintended consequences. It is a choice that only the individual, suffering through the experience, can make, hopefully within the bosom of a loving community.  And while a wider community is needed to provide love, guidance, and support; that community – whether religious or political – can never impose its will on the one who must live with the consequences of choice.

Unless you have stood by the death-bed of a love one passing away in excruciating pain, you really can’t understand this spiritual conflict I’m trying to share.  Remaining true to religious convictions is always easy when never tested against reality.  It’s easy to be in favor of war if you or your kids don’t have to go fight and die; to be against abortion if you are not carrying an unwanted pregnancy, especially if that pregnancy is caused by rape or incest; to favor capital punishment if you are not a victim of a horrific crime; or be against euthanasia if it’s not your love one suffering.  For folks wrapped in the naiveté of simple solutions to the complexity of life, grace is neither needed nor seldom extended.  But for those of us still working out our salvation in fear and trembling, maybe we need to learn how to rely much more on God’s grace for the contradictions that marks our existence. 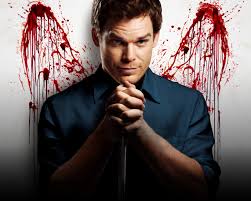 Dexter Morgan, the fictional character on the popular Showtime series, Dexter, is a forensic blood splatter analyst for the Miami Police homicide department. Those who watched the eight seasons (as I just binge watched) know that Dexter is a sociopath with supposedly no feelings or conscience…. 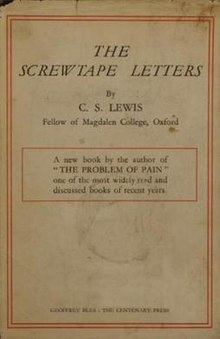 On Wed, Dec 4, 2013 at 5:36 PM, Screwtape screwtape@hotmail.com; wrote: Dearest Wormwood, It is with great pleasure that I hear of the success you are having with your Christian patient. Just because they say they follow the Enemy does not mean they are lost to…