I am standing near the terminal gate waiting to board my plane, which is running 20 minutes late. Although my boarding pass has me in Zone 2, I have traveled enough to know it will be a while before my zone is actually called, for different groups, those with children, those in wheelchairs, or just those needing extra time on the jet-bridge are given priority. Eventually, the announcement will be made that military personnel in uniform can now board. I witness two soldiers step forward and proceed to hand over their boarding pass to the agent. But before she accepts the tickets, she asks permission to shake their hands, and while doing so, in a fairly load voice, thanks them for their service.

This ritual is not new. I, as well as you, have noticed this banal attempt to honor those in uniform. I have been on all too many flights that ended with a crew member, over the PA system, expressing gratitude for our military personal. This has occurred so often that, like the instructions on how to fasten a seatbelt, I stop paying attention, until today, as I gazed upon this dance before I prepared to board my flight.

As I watched this ritual take place, I couldn’t help but wonder what might be going through the mind of the ticket agent, the crowd watching, and the soldiers being honored. This choreographed performance signified something more profound than simply attempting to honor someone who risked his or her life in the longest military engagement of U.S. history. Through this meaningless travel perk, it seems as if an attempt is being made to define who we are as a nation, and just as important, mask our complicity in a war we blissfully continue to ignore.

Unless you missed it, Operation Iraqi Freedom and Operation Enduring Freedom/Afghanistan came to an end with the start of 2015. The wars are officially over – sorry, no parade. I say officially because there are still boots on the ground exposed to all the dangers of war’s violence. During these long years, our engagement in these military conflicts asked no sacrifice from the general public. In fact, what we the people were asked to do to support our troops were to go shopping. Using the excuse of providing the families of war casualties privacy, we engaged in military conflicts that never showed us dead bodies in the field or on their return home in coffins. Americans were given a sanitized war without blood, death, or gore. If it weren’t for the airlines making a big production in thanking our troops, most would easily forget that a volunteer army was dying in combat defending us from some grave imaginable threat to our way of life.

How many of us even know that 2,356 U.S. soldiers lost their lives in Afghanistan, and an additional 4,489 died in Iraq. As staggering as these numbers are, by 2012, more U.S. soldiers killed themselves than died in combat. Young lives are returning from the crucible, so deeply damaged by what their nation has asked them to do, that the only answer they seem to find to their trauma is suicide. So how does a nation justify the neglectful slaughter of their young? By selling them and us the propaganda that these deaths were not in vain, that these were noble patriotic deaths in the defense of our liberties. In fact, when the airline personal thanks those in uniform, they usually qualify their gratitude with some reference to the protection of our freedoms.

For the record, none of our liberties or freedoms was ever threaten by either Iraq or Afghanistan. Neither the Taliban nor Saddam Hussein, with their backward military apparatus, were ever a real threat to the greatest military fighting machine ever known to humanity, a machine that spent by 2012 over $711 billion annually, representing about 41 percent of the world’s total military spending or equal to the next 14 countries combined!

We invaded other countries on flimsy excuses, Iraq masterminded 9/11 and had weapons of mass destruction (both proved false) and the Taliban was hiding bin Laden (it seems to have been our allies in Pakistan) because our neoconservative goal was an economically driven venture requiring the establishment of political dominance in volatile regions. When we spoke about bringing freedom to these nations, our political leaders never meant democratic freedoms; but rather, the freedom for us to penetrate their markets. So while our nation and our soldiers heard political freedom, the architects of the war meant a neoliberal global policy beneficial to the U.S. economic elite: the freedom for the few to make money. We have asked our young to kill and die for the sake of empire building, not nation building.

The senseless death of a single person is one death too many. Multiply that by 6,945 times and we developed an American human crisis. And if we, for just a moment, stop being so U.S.-centric, only valuing American lives, we would recognize that the death of that one person really needs to be multiplied by 298,000 to 354,000 times to include contractors, allied personal, allied troops, civilians, opposition forces, journalists, NGO workers, and humanitarians; thus creating a human catastrophe, while we who remained civilians went happily about our lives only to give scant recognition of the massacre until boarding a plane where those in uniform happened to be present and were thanked.

Complicate these numbers with the Department of Defense undercounting of Americans wounded in action at 52,010; even though more than 970,000 disability claims have been registered with the VA by Iraq and Afghanistan veterans since March 2014. Absent from the official carnage counting contributes to their absence from the nation’s consciousness. Maybe this might explain the half-hearted attempt made at airports to honor those who sacrifice much for a political adventure that had little, if anything to do with the security of the United States.

And yet, while waiting to board my plane, I can’t help but wonder if maybe a better way to honor these men and women might not necessarily be to allow them to pre-board. Maybe a more meaningful gesture might be to properly fund the VA and not continue to cut their benefits as advocated by the very same politicians whose saber-rattling sent them to an unjust war? Maybe we can provide professional trauma counseling and suicide prevention programs? Maybe we can adequately fund educational and job-training programs? And for God’s sake, maybe we should provide proper medical attention and disability support through a state of the arts VA program that attempts to bring healing to the damage we inflicted upon these young women and men.

I was against these wars from the start. I was also against the previous wars. And for the record, I am already against the next war. Nevertheless, regardless of our stance, we as a nation have a grave responsibility to those whom we send, based on a warp understanding of patriotism, to storm the very gates of Hell. And while I don’t mind that they pre-board the plane before me, somehow, I doubt this is enough. Gratitude is but an empty gesture if we leave these soldiers to soldier alone the consequences of what this nation asked them to do. 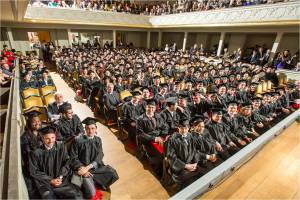 Academic departments of religion lack faculty of color not because they have difficulty finding any; but simply, they lack the will to hire any. If you are considering attending a theological school that does not have core professors (as oppose to adjuncts) who are from…

Why Same Gender Marriages are as Biblical as Heterosexual Marriages

Nonsensical quips like “it’s Adam and Eve not Adam and Steve” reveals the simplistic and mistaken application of Scripture to the understanding of marriage. Claiming that the biblical traditional marriage is only between one man and one woman signifies an unsophisticated comprehension of the Bible, its…